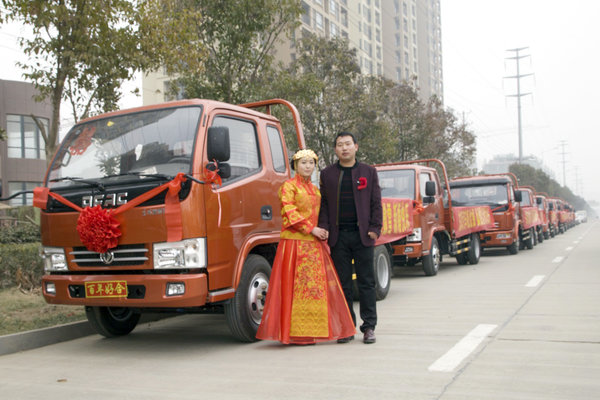 The groom, the bride and the domineering truck welcoming the marriage team photo

As the saying goes, there is money but no money to marry a wife and go home for the New Year. Recently, a couple of newlyweds in Bozhou, Anhui Province officially entered the marriage hall on the traditional Chinese Laba Festival. As a result, there has also been such a team that is the most popular lineup in the history of Bozhou, Anhui-consisting of 10 cars. A wedding team jointly built by Red Dongfeng Dolica and a Tesla. The 10 Dongfeng Duolika trucks drove slowly in turn, witnessing the happy marriage life that the couple is about to enter. The scene also attracted many passersby to stop and watch. 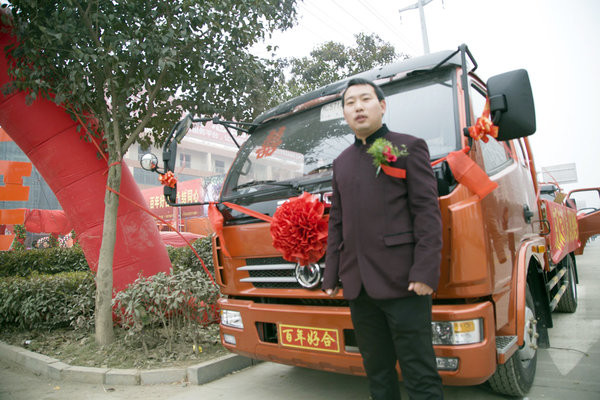 The bridegroom has dealt with "old friend" for many years

According to the groom, Shen Zhen, he is an employee of the Dongfeng light commercial vehicle franchise store in Bozhou, Anhui. The idea of ​​using a truck as a wedding car was approved by the young couple after communicating with his wife. The indissoluble bond between the groom Shen Zhen and Dongfeng Dolica Trucks can be traced back to his junior high school. Because he liked to play with trucks very much, he learned to repair cars with his father who was engaged in car repair work. Dongfeng's trucks were also dealt with, and his father taught him all the car repair skills that he had summed up most of his life. Nowadays, Shen Zhen is also mainly engaged in the overhaul and maintenance of Dongfeng vehicles. For Shen Zhen, Dongfeng Motor is not only a maintenance and repair object or a cold freight tool, but more like an "old friend" who has been with him for many years, with a very special complex. Since his usual job is to deal with these trucks and truck drivers, he wants to use this special way to marry the person he loves most, and at the same time, convey the positive energy of the truckers. Shen Zhen said that although many traditional wedding welcoming cars nowadays are expensive cars, in contrast, the sedans are also weak. 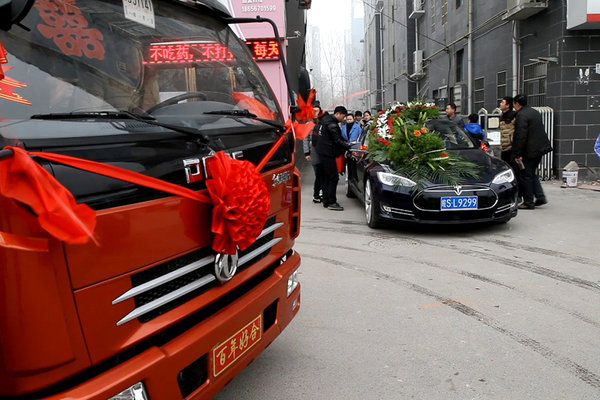 Domineering, creative truck wedding car is not inferior even with Truss

In the early morning, 10 Dongfeng Dolica, all in red, were all ready to go. The high-end and domineering light truck model was decorated with red silk flowers, flowers, and red happy characters, which was particularly eye-catching. The shiny red metallic paint, lined up in a line, is festive and tidy. It is the first time to use such a tall and creative light truck to make a wedding car in the local area, but it has grabbed the limelight. These 10 red Dolicas, with the expectations of relatives and friends, carry the happiness of the new couple and the longing for the future life.

In this era of pursuit of personalization, for Shen Zhen, a young generation newcomer, when getting married, the domineering and cool wedding car will be particularly worthy of a lifetime. Red symbolizes reunion and happiness, and Dolica has the meaning of Dorje Doli. Shen Zhen also hopes to use his own ingenuity to create a distinctive welcoming team by combining with the characteristics of Dolica Trucks as the opening to outline a good start for the young couple's new life. As Shen Zhen told reporters, using traditional cargo trucks as the wedding welcoming team, ultimately wanted to use this method to show their special romance and create a creative and unforgettable wedding.

We,Zhengzhou Dongfeng Mid-South Enterprise Co., Ltd, has been focusing on various kinds of commercial & passenger vehicles, construction and agriculture machinery, spare parts and so on,if you have such need,please feel free to find us at :www.cn-dfm.com